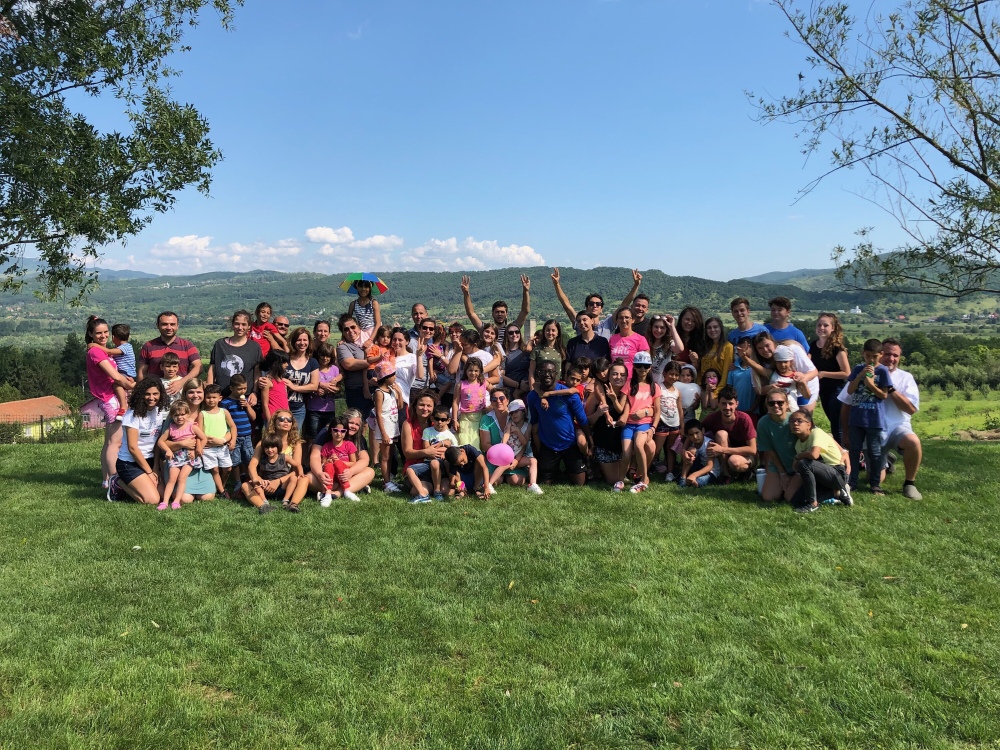 I’ve spent the better part of a week processing what our team of Americans and Romanians experienced while hosting a camp for 35 Roma Orphan children. Suffice it to say, we are changed.

Most believers would agree that we are to respond with action to the simple Biblical command to, “love others as ourselves.” How many of us take the opportunity to truly live it out? We love our families. We serve where we are able and it fits our schedule and budget, and we are quick to give the good old side-hug to those who look like ourselves. But what about a deep, embracing hug with a little person who hasn’t had a bath, has worn the same clothes all week and who really wants to share your sandwich or feed you a taste of his favorite snack?

I have often given a simple challenge to those I’m called to lead, a simple nudge to show love whether it be to the lady on the other side of the gas pump or the clerk who is clearly having a bad at the grocery store. If we are not able to be faithful in the small things, how can we expect God to use us in bigger ways? Just as a plant sprouts, grows, spreads its vines and begins to produce fruit, as we begin to live in such a way that our lives reflect the light and grace of Christ Jesus, a lifestyle of compassion must eventually lead us far from that gas pump conversation.

James 1:27 tells us that the purest application of our faith is that we care for orphans and widows in their time of need. If we take seriously the command to, “love our neighbor as ourself” (Mark 12:31, Leviticus 9:18, Matthew 22:39), and couple that with James’ charge to show compassion to orphans, a legitimate step is to seek out an opportunity to meet the needs of orphans. It’s all daisies and tulips until God opens our eyes to the great need of the fatherless worldwide. That’s when we have a choice to make. Continue as we always have while pretending the issue does not exist, or step into the trenches and get our hands and feet dirty. My bride and I made the bold choice six years ago this summer that we would foster to adopt. We wouldn’t be picky, we didn’t care if the children God blessed us with were purple, we just wanted to have the opportunity to show God’s love through the relationship of family. What better way could there be? What better context than a home where love is freely given with nothing expected in return to show the love of Christ. God has, in fact, adopted us into His family through the sacrifice of Christ on the cross.

Obviously, not everyone is able to foster or adopt a child, but we can certainly become a part of the solution. Anchor of Hope Romania and Tzuby’s Kids are doing just that! We were invited to be a part of a week long camp to be offered to 35 orphan children ages 3-10. Questions abounded. What better could be accomplished with the funds to be spent? Couldn’t Romanians do the job better, after all, language would be an obvious barrier, right? What lasting difference can be made from a week long camp? All legitimate questions. However, we persisted. I have seen over and over again how short-term mission trips often ignite a passion in those who travel great distances to be a part of them. Often the impact is greater in the heart of the volunteer than those served. This camp would have immense impact on both fronts.

Love became the universal theme. We were joined by a large team of bilingual Romanian volunteers, many of whom are college students in Bucharest who heard of the need for servants through their local church and answered the call. Their love for the Lord and for the children we served was incomparable. What we experienced however, was that despite the language barrier, love is a language which surpasses all boundaries and which knows no borders. Yes, our Romanian counterparts were fantastic translators, but the communication which took place through eye contact, physical touch and physical needs met far surpassed any spoken word. The bond formed between volunteer and child (be that American – Romanian or Romanian – Romanian) was as strong as any I have ever witnessed or experienced. For much of the bus ride home from camp the little gent I worked with, Nicholas, cried out, “John, I love you. John, won’t you have me?” Heart wrenching tears and cries for more time filled the air as we watched from the busy city sidewalk while the children packed into cars six to a row as they departed with house parents. 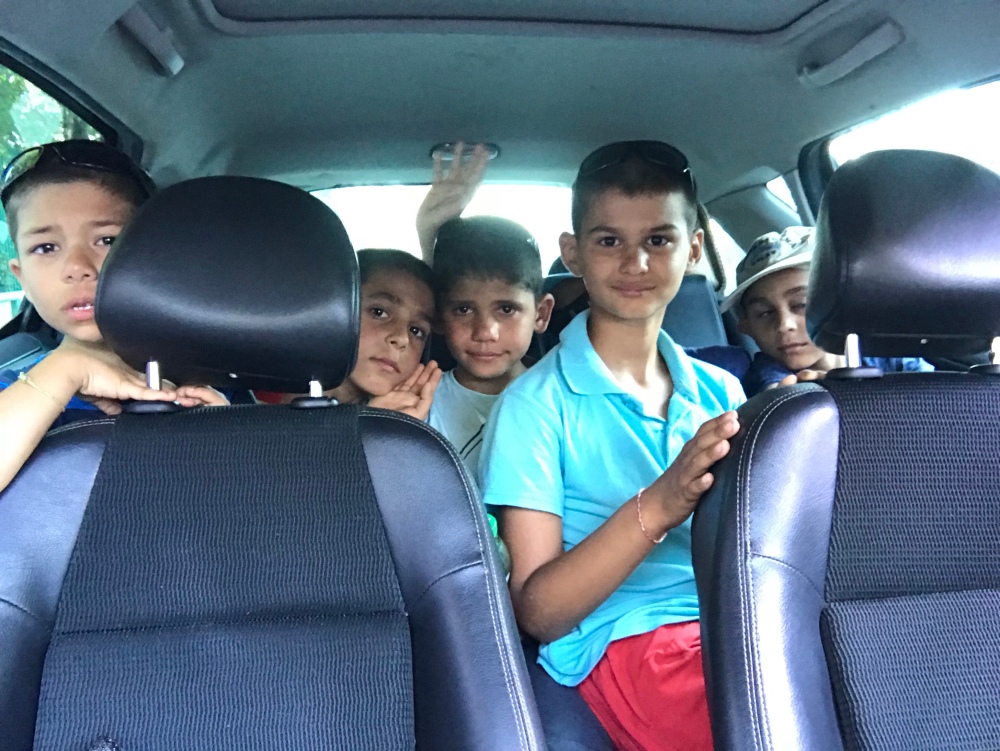 Why go through such an experience? What difference could it possibly make? You see, while we pray fervently otherwise, these children have almost no chance of adoption in the country of Romania. They are unwanted, undesired, unloved. Most of the Romanian volunteers we worked with had no idea these kids even existed in their city. I will never forget a particular glare cast our way as we walked down the country dirt road from camp to bus on Friday morning. A young girl, about ten years of age rode past Nicholas, his brother and friends as we pressed to the side of the road to allow them to pass by in her mother’s car. The glare which she gave the boys was as evil and hate filled as one could possibly muster. A reality these children face, not due to of any fault of their own, but their ancestry.

Love is the only solution to their situation as much as it is the one thing they have been deprived of since birth. I am still fascinated by the fact that these same children greeted me on my first visit to an orphanage with Sarah Smith and Anchor of Hope in October of 2012. These same children started their lives in an abandoned baby hospital. Throw away children, if you will. Doomed to a dire existence strapped to a crib, force fed, left to lie in soiled clothes until a worker might rotate by on her scheduled afternoon rounds as she yet again force feeds, hoses off rather than bathes, and then moves on to the next crib. My first memory of the Orphanage I visited in 2012 with Sarah is the image of about 15 tiny Littles lined up along the wall of a hallway seated on training potties. Personal space nor privacy exist in an orphanage. On the next floor we were met with the friendliest, most desperate faces who immediately plunged hands into our pockets and hugs around our waists. What these children have missed would seem to be the most basic of human needs – love. Our God is the author of Love. We are made in His image. A mother nurtures and gives love innately. Yet, for these children, the process is interrupted, in turn short circuiting development. Research has shown however, that the process can be jumpstarted and the brain rewired even, through simple yet intentional expressions of love and affection. Hence the camp which we assisted with – Trust Based Relational Intervention (https://child.tcu.edu/about-us/research/#sthash.PmBkIU51.dpbs)

Love is the most basic of human needs. When we don’t receive it from birth, it alters the development process. The desire for love and acceptance is so great that the human psyche is driven to pursue it, be that through healthy or unhealthy expression. A camp such as the one we were a part of allows children desperate for love, the opportunity to experience love with no strings attached. The adult worker isn’t expecting favors from the child and truly gives healthy affection and nurture freely. This is not an everyday experience for children who are wards of the state. One of the most striking expressions I witnessed during the week happened on the fourth evening. Nicholas, nine years old, had become very close with a little girl of about the same age named Nicholetta. As they exited the trampoline this particular evening following a fun time of jumping and laughing together, Nicholas reached out with his hand, took Nicholetta by the chin and pulled her to himself in a very romantic fashion. He then planted a kiss square on the lips. They smiled and jumped out of the trampoline onto the ground. It struck me to the core. Our basic need is love and acceptance. When not experienced in a healthy, normal fashion, the human psyche will seek it in any manner possible. We each desperately need Agape Love – the unconditional love of the Father for His children. We long for Philia – the bond of friendship. We often experience Storge – an empathetic love. Yet, as children seeking any form of love, the most dangerous is Eros – most often expressed between a man and a woman. When not experienced in a healthy developmental process, the search for love can become the very force which perpetuates a situation such as Romania is experiencing among it’s Orphan population – now 65,000 strong and growing. Children seeking love which they have been deprived of will search for it wherever it might be given.

Yes! A resounding Yes. The camp was a huge success. Lives are forever changed because of the funds, prayers, sacrifice and investment made. 35 children have now experienced, some for the very first time, a bonding relationship. They have experienced unconditional love – freely given and freely received. 12 American volunteers and a crowd of Romanian volunteers have a new vision for God’s call to care for orphans. We are wide awake and ready to meet the call. Our prayer now is that God will use this experience and relational foundation to begin to nurture a personal relationship with each of these Children. May they now have a starting foundation upon which a relationship with their Heavenly Father will make sense. You see, apart from a healthy understanding of earthly family, one really can’t wrap his mind around a relationship with a Heavenly Father. On this trip to Romania, we experienced Love. Thank you for the opportunity!

Just an ordinary guy called to do extraordinary things. Catch a glimpse into my life and ministry in Eastern North Carolina with my family and Wrightsville Beach Baptist Church.
%d bloggers like this: