It’s 7 pm and we’re 2 hours south of the hotel. We’ve just had the second amazing meal of the day prepared by the sweetest ladies of a church in Antonesti. in fact, as dinner came to a close, we presented these three hostesses with afghans knitted by our own Carolyn Walls. What a special moment.

We have visited four churches today across this district and have met with 11 local pastors. What an honor to hear their vision for reaching their villages and surrounding areas for Christ!

Our first stop was just outside of Chisinau. Igor and Pavel pastor a 15 year old plant which Igor personally launched as he completed seminary. They were forced to move 5 times in their first year as the local government and Orthodox Church were not receptive to the new work. Seven years later they were able to purchase an abandoned sewing factory. Their earliest ministry in the building was allowing local residents to repair their clothing and shoes free of charge on the old equipment.

Now, 15 years later, they are in the process of building a new worship center, they have three satellite locations with a vision for more than a dozen and the facility is simply awesome. Igor’s dream is to house young pastors in the church dormitory while they commit to six months learning a trade and completing Bible training. Many will learn bee-keeping or some other necessary trade related to the agriculture and grape industry.

Once the six month internship is completed, the young pastor will move with three or four other men to a village where they will plant the new satellite church. What an awesome, well thought out vision!

From the other village planters we heard great stories and beautiful vision. Two of the “young men,” 28 and 30+, have just been ordained and begun their work in the past month. One such pastor and father of eight in Palanca has so massaged his relationship with the local government that they have recently launched an after school program in the town school – rent and utility free!

At present, Svettelana – program director, works with 17 eight to twelve year olds. They learn French, complete homework, study the Bible and receive what is for most, the only hot meal they will have all day. In talking with Svettelana in this old Soviet era classroom, she identified her greatest needs being modern desks and silverware for the students. We couldn’t help but think about our outdated laptops which would be light years ahead of anything available to them presently.

I thank God for an awesome day traveling the Southeast corner of this beautiful country. The leaves are nearly in full bloom and the rolling hills have me thinking of Highpoint, NC. I am beginning to catch a clear idea of how River of Leland and other churches of NC will be able to bless these beautiful people in years to come. 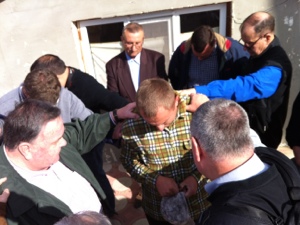 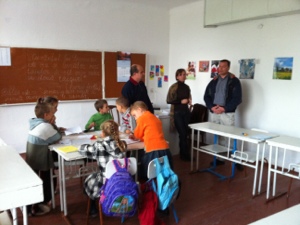